Last summer I picked up a swarm during the summer and popped it into a jumbo langstroth Modern Beekeeping poly nuc.  The swarm had gone into a compost bin in a back garden of a woman who really didn’t want them there, but they moved quickly up into the body of the poly nuc (with a bit of encouragement / smoke). 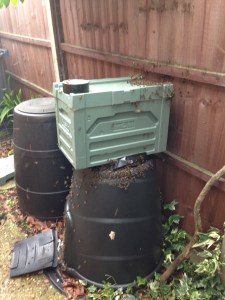 The polynuc is a jumbo langstroth.  One end is boxed in, so that the commercial frames fit with the right beespace (except at the bottom).  They do seem to be good polynuc’s, the sides and the lid seem quite thick. 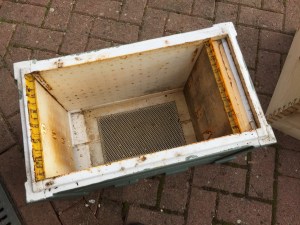 One end blanked off to get a commercial frame fit

In the summer rush they got a bit ignored, with infrequent checks and a lack of anywhere else to put them.  However I’ve made sure they had fondant on the top and they have really thrived and seem to have come out of the winter strong.  This was them back in early Feb, making the most of a day with some sunshine. 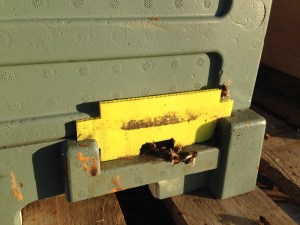 So, on Friday I had a day off and decided it was time to move them into one of the now vacant hives that had died out over the winter (hive D1).  The hive got a flame out (it’s wooden not poly!) and they were moved over very quickly.

It was a lovely day here and so after popping the new hive on the site of the polynuc, it was a five-minute job to move the frames across.  Not an angry bee in sight, all the flying bees went to the old site with the new hive and the ones in the nuc stayed calm as I moved them across. 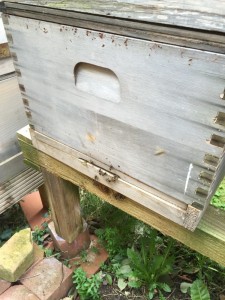 Just a bit of extra activity in front of the hive as they get used to their new home.  Fingers crossed they’ll build up well for later in the year.

After a cold and wet Saturday morning the afternoon turned out to be sunny and warm and was spent with the Peterborough and District Beekeepers spring course attendees.  It was the last week of the course and they were able to get into and inspect some hives in pairs.   The bees were well behaved and everyone seemed to enjoy it.

I hope and think quite a few will look to go on and keep bees.